21/3/2013
Finally arrived in Koh Chang after almost 12 hours of journey from Koh Samui to Koh Chang.
During this trip I had to travel by plane, mini buses, taxi, ferry. The journey was even though long by my standard but towards the end was not disappointed as I still remember the spectacular view in the evening towards the end of the trip. It was just so nice to stand at the ferry pier opposite Koh Chang island and watch a fantastic sunset before I could get on board.

My first impression of the island that evening was that it was pretty laid back and less crowded then Samui, Phuket. I managed to find a budgeted backpacker bungalow at White Sand Beach for around US $ 17 per night with air con away from the beach. Could have been better place to stay but I was just for the night so no fuss. I am used to worst in the past. The accommodation in general does not seem expensive here even for the upper range.

Russian and Chinese have even invaded this place too.

22/03/2013
White Sand Beach was nice place to visit in the morning. It is the most busy beach here on this island of Koh Chang but to me it seemed much less crowded as compared to Chaweng in Koh Samui. At noon I took a taxi and headed to Bang Bao beach. The roads here go up and down the hills and not a place for drivers with weak skills.

I caught up with my boss and we chilled out for a few hours in a nice restaurant along the pier having a few beers. He was very pleased with the performance of his boat which he sailed during the past few days. My first impression on getting on this boat was real nice and cool. We sailed with this mono hull from Bang Bao to another close by island. We have put up anchor here and will spend the night. Tommorow our long journey to Samui begins in early morning. Time to get some much needed sleep.

Wish I could have spend a few more days here in Koh Chang a real nice island in Thailand. 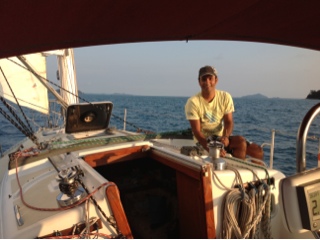 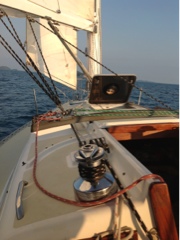 Mr Wojtek - Sailor with a noble cause.

Yesterday I met Mr Wojtek from Germany on our sailing boat. A man who plan to travel around the world experiencing new places with a noble cause.

Mr Wojtek a young man looked like in his late 20's or early 30's in my opinion had been sailing since years on his "Bavaria" mono hull sail boat. His story is adventurous and brave.

A few years back he was well renowned for his football playing skills and represented a local football team at amateur league level in Germany. He was scouted by one of Germany's top football team FC Koln, who signed him up to represent their team in the upcoming season for Germany's highest football league - Bundesliga. Very soon he was going to be qualified as a professional level player.

During the last league game at the amateur level  he suffered serious injury when he clashed into the opponent teams goalkeeper. His leg was seriously damaged on his knees and he could not make it in time to get immediately operated. As a result due to the delay the doctors had to amputate his one leg and he became disabled. It must be a great tragedy for him or for that matter to any one in this situation.

Soon he recovered and had a custom made prostheses for his amputated leg. Been into sports for so many years at top level he could not stay away from it and started to train in sprinting with his new found remedy for his disabled leg. He was soon one of the best sprinters at national level in Germany for his category and won many medals and contracts with top brand companies. To date he is still sponsored by brand names. You cant take away success from a winner!

Of recent he want to get more involved in his other passion - sailing. He brought a 41 feet long cruising catamaran from the renowned brand "Lagoon" an awesome boat and plans to sail around the world with his girlfriend for at least 4 years.

During this voyage he plans to stop in poor or developing countries and want to teach people with physical disabilities to sail or help them in which ever way he could to improve their lives in little ways so that they can be accepted by their societies and live a better life.
It can be a taboo in these places for disabled people.

Indeed a noble cause and such a nice story of a person living life happily in a positive manner.

The few hours he spent with us he learnt a few things about sailing on a cursing catamaran as he had never sailed one before. Mr Kunta my boss and me helped him out enjoy a great time out on the sailing boat. He also chatted to me about how he learnt to scuba dive and his interest for fishing. He is a very cool and interesting person I have met and speaks excellent English too.

I wish him all the best with his new boat and voyage and we will definitely see him when he comes to Koh Samui in Thailand. 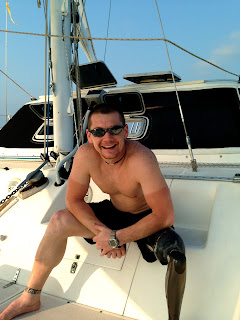 Sea, sun and nature, being close to them always enlightened me.

Since years I had been working as a scuba diving instructor and experienced  the underwater marine world and the beautiful sea. It's been real fun. I finally decided last year to take a break from scuba diving for a bit and do something new. Even though my passion for scuba diving is still very strong and I love it but I thought I needed to do something different for this moment so I took up sailing, something I always wanted to do.

In 2012 after spending a few months in South Africa I got qualified as a Yacht master in sailing and motor boat by the Royal Yacht Association (UK sail training organisation) . During my training I had learnt so many new things about boats, sailing and found the education real helpful, thorough and fun. It gave me a sense of pride and satisfaction to have achieved another milestone during my life.

Currently I  am working with Samui Ocean Sports & Yacht Charters in Koh Samui, South Thailand. Five months into my job and I have noticed each day I have been learning new things about boats, sailing and the marine industry. The thought of staying away from scuba diving for many months rarely appears just because my new adventure has kept me very busy and happy. At times I do miss scuba diving and all the lovely people that I met in the past through it and being a instructor teaching but sometimes one has to move on.

The last few months working in sailing have passed very quick and even though I may have qualified as a Yacht master I do still learn a lot from my fellow colleagues some of whom are half my age. My boss Mr Kunta a German national has been outstanding so far and I have had a good relationship at work with the entire team.

I have been testing my hands on three different boats from mono hull to cruising catamaran and improving my skills day by day.

Best trip:
3 days sailing trip with great people from Koh Samui to Koh Tao and back with Ritchie, Stuart, Kunta, Markus, Howard. Great moment being with a bunch of nice funny good people on the boat.

Best group of customers:
Indian groups during new year from various parts of the country. The colours, music, variation, joy and happiness made them special. Must admit I missed the day when six sexy ladies from Singapore came on the boat and it was my day off. My boss and the crew present had a awesome time.

Best boat at work:
"Dream catcher" cruising catamaran for simple reason so much more comfortable, spacious easy to handle, music on board and also good to communicate with the customers. "Crazy Horse" catamaran comes second as its easily the fastest boat and on some days with strong winds racing away is sensational.

Upcoming Adventure:
Soon I am expecting to do my second major sea voyage with Mr Kunta in a few days from now when we sail all the way from Pattaya to Koh Samui passing via Koh Chang in Thailand. We will be  sailing our new addition to the fleet, a 32 feet mono hull for a week with a stop over in Koh Chang. The voyage seems challenging during the second leg from Koh Chang to Koh Tao as we will be crossing through The Gulf of Thailand just both of us nonstop for two days in the middle of the ocean doing shifts of 4 hours each. Going to be hard.

I will update my blog about this trip and trust me it will be interesting cause a sailor always has something interesting to say of the sea.

Hope you all are doing well and enjoying your precious times in life.
Keep in touch.
Follow Bobby 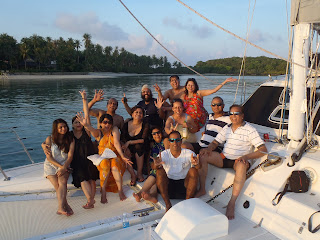 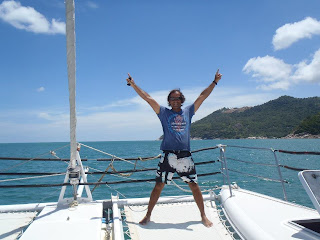